The objectives of this year’s excavation were:

Below: 3D interactive model of the Priory Park 2018 trench, made from over 250 individual photographs. Press the 'play' symbol, then when the model has loaded left mouse click and hold to rotate, right mouse click and hold to pan, mouse scroll wheel (or hold Ctrl + drag) to zoom. Click on numbered annotations for more information on the features identified.

Trenches were excavated across the south-east corner of Building 1, and the west end of Building 2 in 2017, and over the majority of Building 2 in 2018. Topsoil and subsoil containing Roman, medieval, post-medieval and modern artefacts were removed by machine and by hand to a depth of c. 55-60cm to reveal a less-disturbed subsoil of brown clayey silt (principally brickearth) cut by archaeological features filled with disturbed dark grey silty soil, and with the masonry remains of Building 2. No remains of Building 1 were revealed at this depth, its walls and floors having been robbed of masonry to at least this level, presumably in the Middle Ages. Soil layers within the alcove at the west end of Building 2 and in the south half of the rest of Building 2 were manually excavated to the level of its floor. A medium-sized pit lying close to the west side of the trench was half-sectioned and proved to be medieval.

Building 2 was constructed in a rectangular construction trench, about 1.1m deep, apparently cut through a layer of disturbed, dirty brickearth, visible to the west of the building, that was dated by pottery to the 2nd century AD. As well as providing an earliest possible date (terminus post quem) for the construction of the building this is evidence for earlier occupation on or near to the site. However, because the surface of the layer was only lightly trowelled and the sample of artefacts recovered is small, no firm conclusions can be drawn at this stage. Apparent discrete variations in the composition of the soil may represent features cut through it that must predate the building; perhaps large pits or ditches.

Building 2 is believed to be a bath house. It has walls 0.5m to 0.6m thick, comprised of large flint nodules set in chalky lime mortar. It is a rectangular structure 8m by 4.5m with a small annexe 1.5m long and 3.3m wide at its west end. The annexe contains a small, alcove-like space 1.7m long and 2m wide, whilst the rectangular structure, measuring internally 3.2m wide and 6.5m long, is of two bays, each 3m long and 3.2m wide, that probably represent separate rooms. The building contains the remains of a underfloor heating system (hypocaust) comprised of a series of roughly equally spaced columns (pilae) of thin, square bricks stacked up to nine high, resting on a mortar sub-floor. They would have been spanned by much larger bricks (pedales and/or bipedales) supporting a thick floor of waterproof mortar (opus signinum) with a polished surface. The space between the sub-floor and the suspended floor would have allowed the circulation of hot air, generated in a furnace and drawn up through vertical tile-lined flues built into the walls. This hypocaust survives remarkably well: only the bricks from the base of the suspended floor and some of those from the columns having been robbed in antiquity. Several large fragments of the suspended floor and a few broken fragments of the larger bricks survived amongst the columns. Also amongst the columns there are many smaller fragments of painted wall plaster (red, yellow and blue) from the surfaces of the walls and others finished with a smooth, white surface that perhaps adorned the ceiling.

The alcove is formed by returns in the west ends of the north and south walls, and slight inward projections at this point perhaps formed responds for a 2m wide arch that would have spanned the entrance into it. In the north wall of the alcove, just west of the respond, was a rectangular niche that probably originally contained a box-flue, and opposite this, in the south wall, was a corresponding niche. The pilae in the southern third of the alcove had been comprehensively robbed, but to the north of this a large mass of broken mortar and tile included a pair of complete box flue tiles, that may have originated in the southern niche, and a large fragment of an opus signinum structure that seems to be the remains of a series of steps, probably from the front of a hot bath (labrum) that once stood on the suspended floor above. This is likely to have been the hottest part of the bath-house.

The hypocaust to the east of the alcove is divided in two by a series or rectangular masonry piers that probably supported a cross-wall. No flues were found in the excavated southern half of this part of the building, so they can only have been provided in those parts of the northern half that remains unexcavated - perhaps only in the north-east corner of the building, furthest away from the hot bath. It is therefore likely that the western bay, nearest the alcove, represents the hot room (caldarium) whilst the eastern bay represents the warm room (tepidarium). The south wall of the caldarium is interrupted by an opening 2m wide through which the hypocaust continued for an unknown distance to the south. A deposit of fired clay and rubble against the south baulk of the trench may represent the remains of a furnace or stokehole (praefurnium). 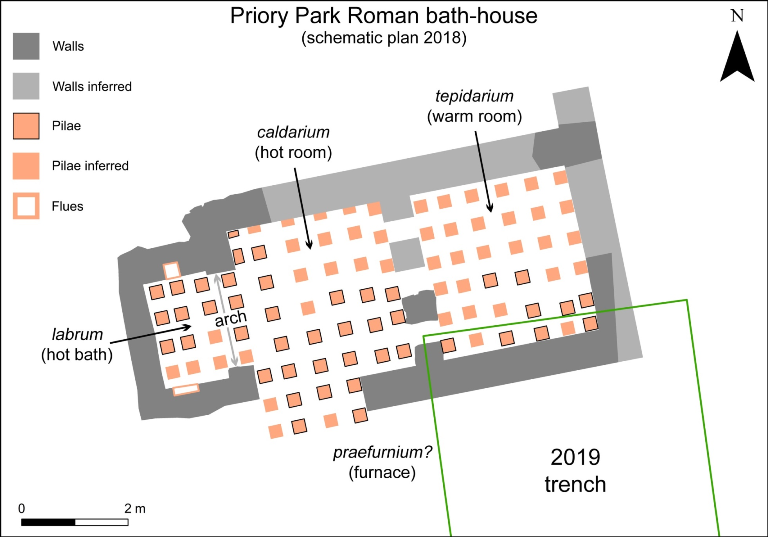 A later Roman phase is indicated by the systematic destruction of the suspended floor of the hypocaust and almost wholesale removal of the large, flat bricks that supported it on the columns of smaller bricks. Judging from the layout of the latter and the thicknesses of surviving fragments of the larger bricks, it is possible to infer that they measured approximately 50-60cm2 and were 6cm thick. Allowing for a double layer, as is indicated by a single surviving section of the floor found during excavation, it would have incorporated as many as 130 of these bricks – yet only nine broken fragments were noted throughout the excavation. Conversely, removal of the smaller bricks used in the columns was much less comprehensive. Presumably the large bricks were specifically targeted by people who knew they were there and weren’t particularly interested in the smaller bricks, the fragments of the large ones they’d broken in the process, or the rubble of the walls. It seems likely that they had a very specific purpose in mind, perhaps the construction of another bath-house, and that this took place late in the Roman period, whereas the rather ad-hoc robbing of the walls probably took place later, when the remains of the building were less visible.

Not much information can be gleaned from the limited number of finds retrieved from the top soil, since these can only be considered residual. However, the tile, tesserae and painted wall plaster are further indicators of the status of the building. As is to be expected in a Roman town, the Roman pottery indicates a very general date range, from at least the second to the fourth centuries AD. 18 Roman coins have been recovered, all of which were residual in later contexts. The earliest are a very worn sestertius of Trajan (AD 98-117) and a dupondius of Marcus Aurelius (AD 161-180), and the latest is a nummus of the House of Valentinian (c. 364-378). Other Roman special finds, which have included bone hairpins, a bone gaming piece and a number of copper-alloy furniture studs, may tell something of the use of the bath-house and of its owners. The results of analysis of the Roman pottery suggest that it was built after the 2nd century AD and that occupation in the vicinity, if not use of the building itself, continued into the late 4th century AD. Hollow wedge shaped tiles (voussoirs) found amongst the remains of the superstructure collapsed into the hypocaust are closely paralleled at Fishbourne Palace, where they were used in a bath-house built early in the 2nd century AD.

It is presumed that the piecemeal robbing of the walls of Building 1 and parts of those of Building 2 and some of its hypocaust columns occurred in the middle ages, principally because of its ad-hoc nature. This is in contrast to the robbing of the suspended floor of the hypocaust, which is considered to be later Roman. The walls of the remains of the friary church, which was built in about 1270, are largely constructed of loosely coursed masonry of a variety of types, including flint nodules, a variety of different types and sizes of stone and occasional large fragments of Roman brick and tile. It may be that the Roman buildings were the source of much of this masonry.

The only certain medieval feature is a medium-sized pit that was sectioned by the west baulk of the trench. It probably relates to the occupation of the Friary. An unexcavated east-west linear feature containing dark soil near the north end of the trench may represent either the robbing of Building 1 or a boundary of the curtilage of the monastic buildings, perhaps with the pit to its south representing a less important area.

Medieval finds, all residual in later contexts, include a D-shaped ferrous buckle frame and a fragment of encaustic tile with white slip inlaid decoration forming a floral or heraldic image. The latter, which probably dates from the 13th to 14th centuries, almost certainly came from a floor in the medieval friary. Two similar fragments were found in removing masonry blocking the north door of the Guildhall in 2004. A limestone fragment of column drum, residual in a later context, is probably Roman in origin but may have been reused in the medieval friary. The medieval pottery represent the sorts of domestic activity that are to be expected in the grounds of a Norman castle or a medieval friary, but it is possible that some of the earliest sherds might relate to a late Saxon domestic presence.

The disturbed upper layers produced quantities of post-medieval pottery and other finds that probably relate to occupation of the mansion and the dispersal of its refuse. Disturbance of the upper layers may relate to landscaping and use of the park since 1838; a thin superficial layer of very fine soil probably formed through the action of small animals and plant roots (known as bioturbation) during a very stable period of use of the area as a public park since 1918.

The Chichester Observer reported on the project in July 2018, see full article here