In 2019 we investigated the area between and including the southern wall of the hot rooms of the Roman bath-house (Building 2) and the northern walls of the house (Building 3) seen in geophysics and ground-penetrating radar to its south. The intention was to identify further elements of the bath-suite, whose hypocaust had been seen to continue in that direction in 2018, and to establish whether or not it was connected to that house. 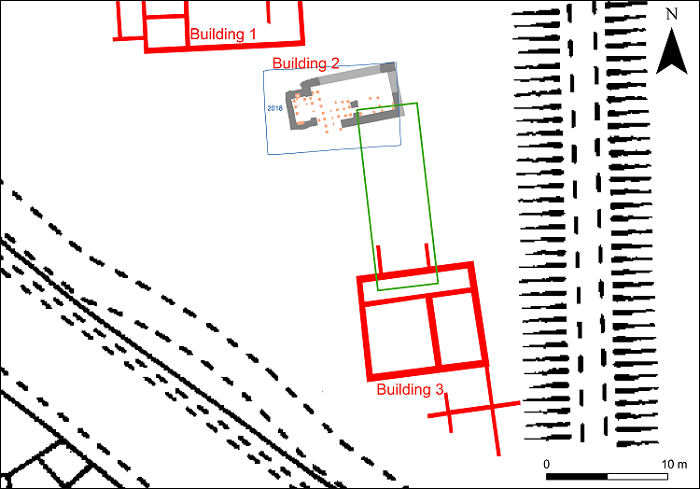 The 2018 investigation (blue outline) concentrated on the hot and warm rooms of the bath-house (Building 2). In 2019 (green outline) we investigated the area between it and the house (Building 3) to the south. Walls shown in red were plotted from the results of geophysics and GPR.

Our annual two week excavation ran from Monday 20th May to Tuesday 4th June 2019. A trench 15m by 5m was excavated, initially by machine and then by hand, to reveal parts of the south wall of the hot rooms of the bath-house and their hypocausts and an area to the south.

Unfortunately it took most of two weeks and some hard trowelling to discover that all the remains of masonry structures to the south of those revealed in 2018 had been extensively robbed, so the only evidence for the southern part of the bath-house was a large, rectangular, deep disturbance, filled with a jumble of decayed mortar and discarded rubble. This either represented the remains of a hypocaust or a large bath, but details of its form and function remain elusive. It was most probably either the cold room (frigidarium), with its cold plunge-bath, or the changing room (apodyterium), which may have been heated.

A key discovery was that a masonry wall had extended south from the south-east corner of the bathhouse towards the house, forming the east wall of the robbed hypocaust/bath. Although it too had been extensively robbed, there was evidence it extended to within at least six metres of the house, where it was truncated by a large pit [31] containing 12th century pottery. 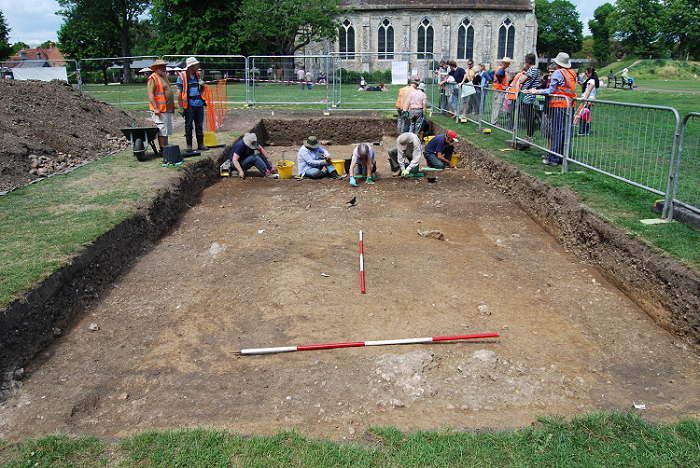 The ‘walls’ of Building 3 starting to emerge

To the south of the remains of the bath-house, the walls of Building 3 were found to be represented by shallow flint and earth footings with occasional traces of a mortared surface. These would certainly not have been robust enough to support a significant masonry structure, so it seems likely that the house was constructed from relatively lightweight timber-framing. Finds from within the area of the house indicated that it had been a relatively opulent establishment, with tessellated and mosaic floors, and that occupation is likely to have continued from the late 2nd to the late 4th century AD. Although no physical relationship was identified between the two buildings, the distance between them is so small that it seems likely that they were connected.

As well as having been comprehensively robbed of masonry, presumably for reuse in other buildings, a series of large pits were found which had been dug across the southern part of the bath-house in the middle ages. Most were probably originally dug as cess-pits, ending up as the repositories for general refuse including large quantities of broken pottery. One of the pits [35] was sealed beneath the disturbed masonry remains of the Roman building, another [37] was cut through this material whilst a third [27] was just east of, and probably outside it. The results of the preliminary dating of the pottery from these three pits can be tied in to what we know of the medieval history of Priory Park and can indicate when the main period of robbing took place. 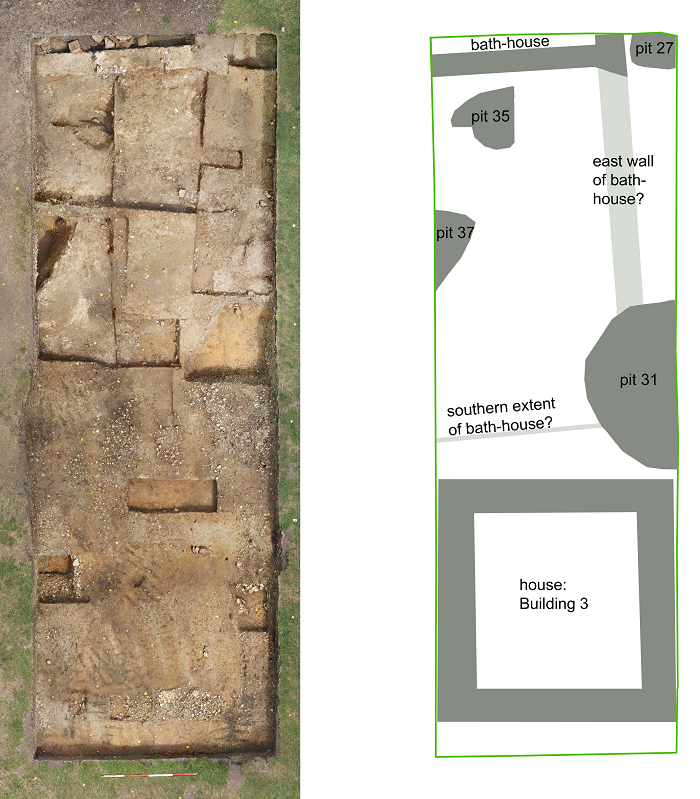 An ortho-rectified photograph of the 2019 trench, with a diagrammatic interpretation.

The pit [35] sealed by the robbing debris contained large, fresh, sherds of pottery dating from the later 9th to mid 10th centuries AD, i.e. in the late Saxon period when Chichester was being reestablished as an urban centre. It presumably relates to general occupation of this part of the town. The pit [27] just to the east of the bath-house also contained large, fresh, sherds of pottery, but this time dating from the 11th century, i.e. late Saxon or early Norman. It could be from a later generation of general Saxon domestic activity, or might relate to Norman occupation of the site with their establishment of a motte and bailey castle after 1066. The pit [37] that cuts through the robbing debris contained smaller, more abraded sherds of pottery dating from the early 12th to early 13th centuries. This material may have been redeposited from elsewhere, perhaps in the disposal of an old refuse heap, or midden, relating to occupation of the Norman castle. It is quite possible, therefore, that most of the general robbing of the Roman masonry happened either during the establishment of stone buildings for the castle or in the construction of the Friary church and other associated buildings. Larger pit [31] was mainly filled with well-sorted angular flint nodules and gravel, together with a few 12th century pottery sherds. Whatever the original purpose, it was filled with what looks like the remains of a metalled surface, perhaps excavated and disposed of during a building project somewhere in the park in the later middle ages. 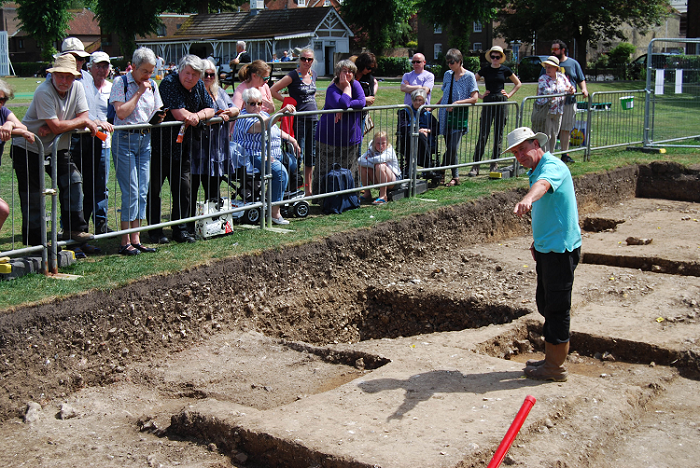 A talk on the results during Public Day

Hopefully we can return to Priory Park in 2022 to continue the investigations. If so, we would excavate a trench the same size as in 2019 and immediately to its west, the intention being to investigate the rest of the area to the south of the bath-house, where the 2018 results indicated that there should be the remains of the hypocaust heating furnace (praefurnium).

A post-excavation 3D model has been completed and is displayed below: As with the other models featured on our website the controls are as follows: