Chichester has been intensively occupied since the late Saxon period, so when excavated, Roman deposits are frequently found to have been severely truncated by later activity. The biggest culprits are the very many pits excavated from the middle ages until the end of the 19th century, principally for the disposal of sewage but also to extract brickearth, gravel and fresh (ish!) water. In many parts of Chichester so many pits have been dug over the years that very little survives of the Roman deposits. Only in those parts of the city that for particular reasons haven’t been intensively occupied since the Roman period can we expect to find good preservation.

Priory Park was the site of a Norman motte-and-bailey castle which utilised the pre-existing Roman city walls as part of its defensive perimeter. Following its disuse the castle was largely destroyed and the site was given over to a Franciscan friary. After the dissolution of the monasteries most of the friary buildings were either converted into a mansion house or were demolished, but the choir of the friary church survived as a council building and guildhall. The mansion was demolished in 1838 and the grounds were landscaped for use as a private, subscribers’ park. This was presented to the City of Chichester by the Duke of Richmond in 1918 as a war memorial and it is now owned and managed as a park by Chichester District Council. 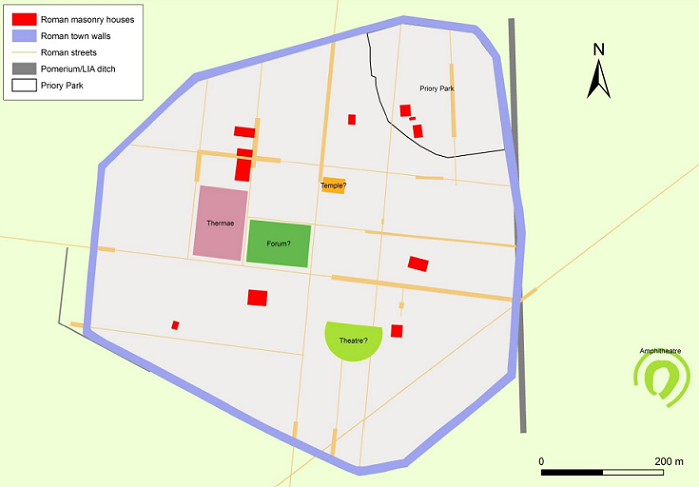 Because of its history the area within the park had remained quite free from housing development, meaning that the archaeological deposits it contains survived the effects of medieval and later occupation that has disrupted much of the earlier archaeology in most of the rest of Chichester (the Cathedral precinct being a notable exception, for similar reasons). However, apart from the excavation of a small area in advance of the construction of a new Hockey Club building in 1992, which revealed no masonry structures, archaeological investigation within the park has been limited to examination of the medieval remains and a few very small test pits and watching briefs with inconclusive results and a resistivity survey that concentrated on the area around the Guildhall.

A ground Penetrating Radar (GPR) survey undertaken by David Staveley in July 2015 revealed a number of highly significant features. A further GPR survey in 2016 and a series of geophysical surveys undertaken by Chichester & District Archaeology Society (CDAS) confirmed and complemented the original GPR results. In one area the results were interpreted as evidence of Roman masonry buildings. 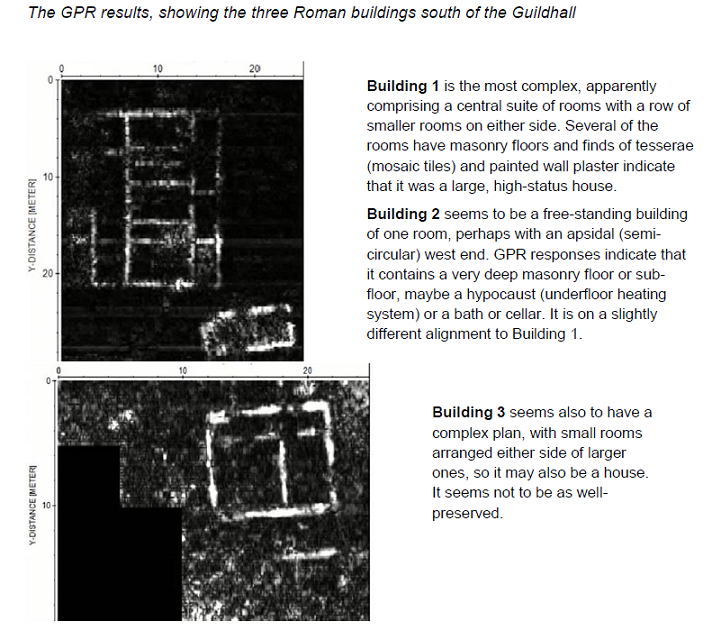 In July 2016 (see link at top of page) a limited excavation (3m x 1.1m) was undertaken by CDAS under the direction of James Kenny of Chichester District Council (CDC). This archaeological evaluation revealed a series of probable wall-robbing trenches surrounding a masonry floor. All these features are of Roman date.

In May 2017 (see link at top of page) the excavation revealed the foundations of a Roman bath-house.

In July 2018 (see link at top of page) further excavation took place to uncover the complete area of the bath house. 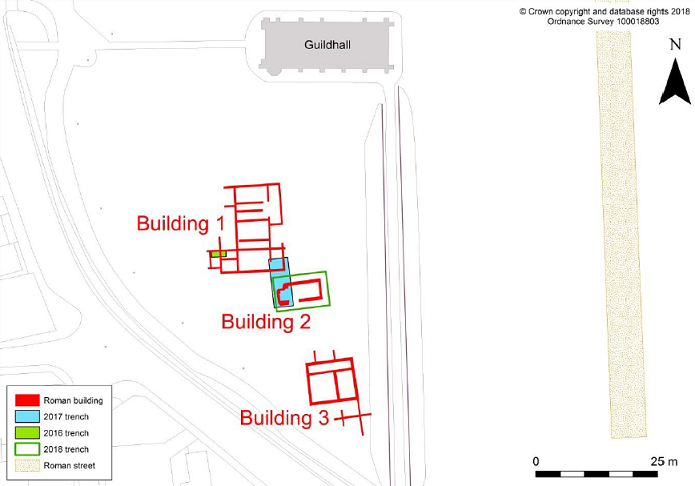