In February CDAS carried out a geophysical survey of the area of Priory Park north of the Guildhall. Responses that can be attributed to the Franciscan Friary, and the subsequent large house in this part of Priory park were found. Sorting out which response relates to which era is going to be tricky, but there is definitely archaeology beneath that part of the park. Subsequent surveys will be constrained by the mature trees across the site. 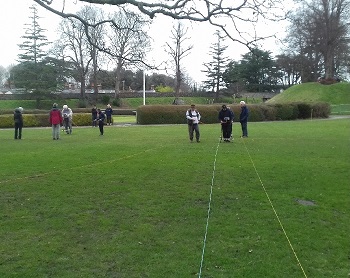 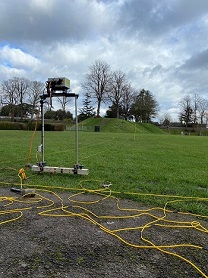 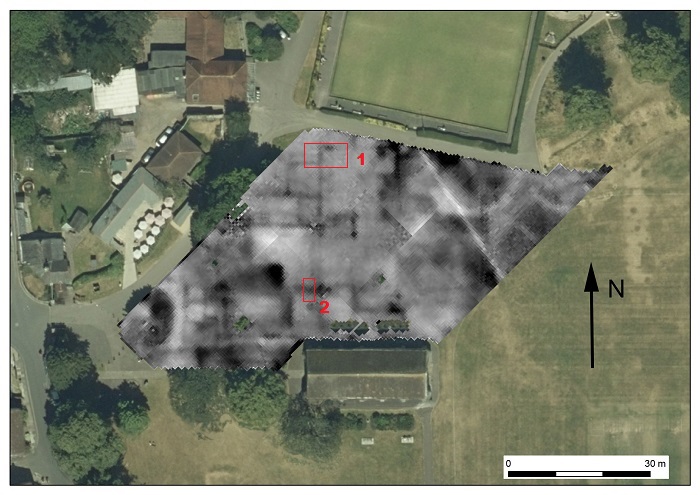 Following on from the geophysical survey, in late May and early June two trenches were excavated by CDAS members led by James Kenny and supervised by Steve Cleverly.

"Trench 1 exposed a wide, north-south wall of flints and Greensand stones laid in lime mortar which ran to a corner near the north side of the trench before turning east. Both walls had been robbed to some extent. Bonded in to the north-south wall and running west from it was a third, very solid wall of flints set in hard lime mortar, which gave the impression of having been poured like wet concrete. This is most likely to have been constructed in the post-medieval period, after the dissolution of the monastery, and to have formed part of a building that utilised part of the north-south wall. The latter is therefore likely to be a reused part of the medieval friary. To its east lay the remains of a mortar surface that is probably all that is left of a medieval floor of tiles or flagstones. Disturbed areas along the east side of the north-south wall and across the east third of the trench probably represent post-medieval or modern disturbance, perhaps associated with demolition of the mansion house and creation of the park in 1838 or subsequent management of the park - as does a modern posthole near the east end of the trench. The surface of the subsoil in the north-west corner of the trench produced quantities of earlier Roman pottery that presumably represent settlement of that period".

"Trench 2 was sited over a geophysics anomaly that seemed to run at an angle to the medieval and post-medieval walls. It proved to be a small, post-medieval or later land-drain comprising a wide ditch containing two rows of bricks capped with small Horsham slates covered with loose gravel. It is likely to be contemporary with the latest iteration of the post-medieval mansion".
James Kenny, 2022

As with the other 3D models featured on our website the controls are as follows: